Understanding of the forces exerted by tsunami waves on sea walls and coastal buildings has leapt forward through research that we conducted with University College London (UCL) using a third generation tsunami simulator.

Experiments using a new tsunami simulator threw up some surprising findings during the five-year  €1.9 million project. These will be important in updating guidance for constructing and assessing buildings and sea defences in tsunami-prone areas.

One notable finding was that the amplitude of tsunami waves may not decrease as they run up the beach, as previously assumed. This is important in calculating the areas potentially flooded by a tsunami, which in turn inform evacuation plans. The research led to the team developing new experimentally-based equations for estimating tsunami forces on coastal structures.

To run the necessary physical experiments, we built two unique tsunami simulators (machines that make laboratory scale tsunami waves), which are the most advanced of their kind, and outperform earlier generations by providing realistic representations of tsunamis. The third and latest generation is the largest specialist tsunami device in Europe, in a 70 m long and 4 m wide channel, and uses 70,000 litres of water to simulate a tsunami.

As part of the ‘Urban Waves’ project, researchers demonstrated that the test facility can produce waves that are realistic representations of tsunami: its size makes it possible to simulate the full duration of a tsunami’s longer wavelengths, which act very differently to conventional storm waves.

With UCL we used the bespoke tsunami simulators in 2015 and 2016 to conduct experiments for the project which was co-funded by the European Research Council. They spent the following two years analysing the resulting data. The project made many important findings across different areas because of the cross-disciplinary composition.

UCL researchers conducted experiments aimed at measuring forces on buildings, and how these are changed or magnified when buildings are clustered together in coastal towns. In parallel to these experiments, they also developed new approaches for the structural analysis of buildings which are hit by tsunami flooding. The hope is that these analysis methods will be adopted within future building codes of practice.

Our HR Wallingford experts supported UCL running and analysing experiments which produced unique data on how huge amounts of water going past a building creates holes (scour) which can result in the lifting of its foundations. They found that the scour hole measured during the tsunami inundation is significantly greater than the maximum depth observed after the tsunami has ended. The implications of these findings are significant for design standards, that base their scour risk on observations made of scour holes after past tsunami.

Our experiments showed how huge amounts of water going past a building creates holes (scour) which can lift its foundations. Pictured with Professor William Allsop, Dr Mark Lee, and Dr David McGovern. Photo courtesy of UCL.

As earthquake engineers, the UCL team also investigated  what happens to buildings when earthquake ground shaking occurs before the tsunami hits. They demonstrated that, unless the earthquake brings the structure near collapse, earthquake damage makes little difference to the building resistance to the subsequent tsunami. This finding has significant consequences for the assessment of coastal communities to these linked hazards.

Professor Tiziana Rossetto, Professor of Earthquake Engineering, and Director of UCL EPICentre, who is leading the research, said: “There has been a growing recognition in the tsunami community of the advantages posed by the HR Wallingford tsunami simulator, and others are trying to replicate it. By raising awareness of gaps in this field, and by advancing knowledge on how buildings perform in tsunami, we believe our project has contributed to stimulating research worldwide into the impact of tsunami inundations on buildings.’

Professor William Allsop, who co-supervised the development of the facility and subsequent research, added: “In our initial work, we modelled the facility using advanced computational fluid dynamics tools developed at HR Wallingford, thus ensuring that this facility has the widest possible capabilities in modelling tsunamis.

“The unique feature of the latest HR Wallingford tsunami simulator is that its tank-based generator allows us to generate a realistic tsunami wave, so simulating the full duration of a tsunami wave – a 20 minute wave duration is scaled to just over two minutes in the lab. Almost no other device can do this.” 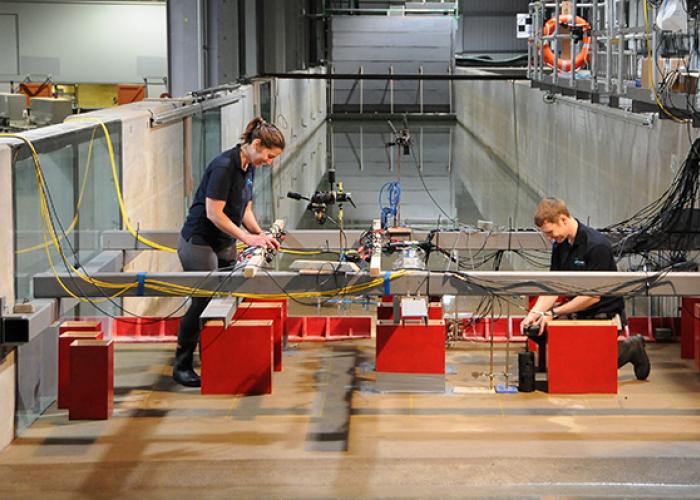 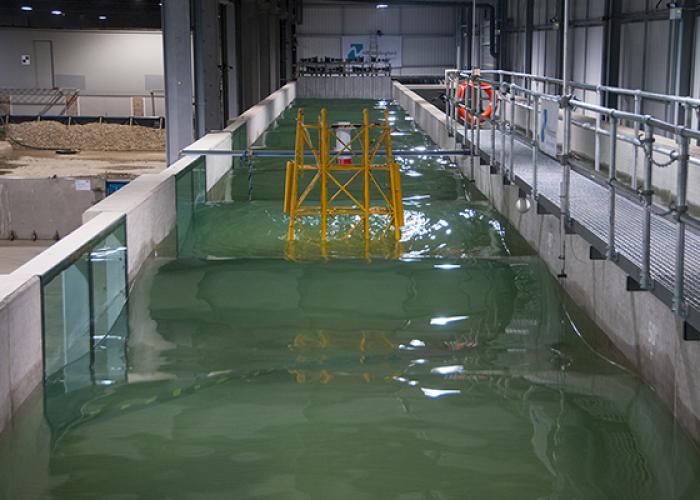