Work has commenced to expand Tangguh LNG plant in Indonesia, which has been operated by BP Berau Ltd since 2009.

The addition of a third train will increase liquefaction capacity of LNG by 3.8 million tonnes per year, which also leads to an expansion of the marine export facility and construction of a second LNG jetty. McConnell Dowell Indonesia, who are conducting the detailed design and construction of the jetty, commissioned HR Wallingford to conduct ship navigation simulation studies, to inform the suitability of the jetty design.

As part of the design process for the jetty, HR Wallingford undertook a combined fast time and real time ship navigation simulation study. These two elements were used to examine all of the navigation aspects of the Tangguh LNG expansion project, including navigation to and from the second jetty, towage requirements, limiting environmental operational conditions, anchorage areas and safety exclusion zones.

The first element of the work, the fast time simulation, used HR Wallingford’s Ship Simulation System running in fast time mode. This is used to assist in the design of relatively straight channels. The study focused on the channel and approaches to the new jetty, and examined a number of classes of LNG carriers and condensate tankers.

The second element, the real time navigation simulation, which used a full mission bridge simulator, focused on the final approaches and the turning manoeuvres, where real time simulation is a more reliable tool. In preparation, HR Wallingford’s expert flow modellers constructed a 2D hydrodynamic model of the area. This was then validated against in-situ flow measurements which had been carried out prior to the study.

At HR Wallingford’s Australia Ship Simulation Centre, a local Tangguh Pilot and one of HR Wallingford’s Staff Pilots, manoeuvred the ships in the final approaches to the virtual second jetty, assisted by up to 4 x 55 tonne bollard pull tugs.

Design Manager for McConnell Dowell, Fabien Cogordan, said: “Being able to take advantage of HR Wallingford’s fast time simulation meant that we could conduct over 8,000 channel transits, equivalent to over 25 years of vessel calls to Tangguh, in a matter of minutes of computer processing time. Combining this with the real time navigation simulation, provided us with a cost-effective and flexible tool to evaluate and confirm the suitability of the jetty design”.

Dr Mark McBride, HR Wallingford Ships Group Manager, said: “The HR Wallingford Ship Navigation Simulation System has been specifically designed for port design and ship operations’ applications, and our full bridge, real time manoeuvring simulators can be used for pilot and tug master training as well. We’re delighted to have been able to apply our knowledge to a project like this in Indonesia, which will have a significant impact on the industry and the local economy”.

The marine construction EPC contract was awarded to CSTS, a consortium consisting of Chiyoda, Saipem, Tripatra and Suluh Ardhi Engineering. Construction of the third train is now underway, which will bring the total plant capacity to 11.4 million tonnes of LNG per annum, with first production from the third train expected during 2020. 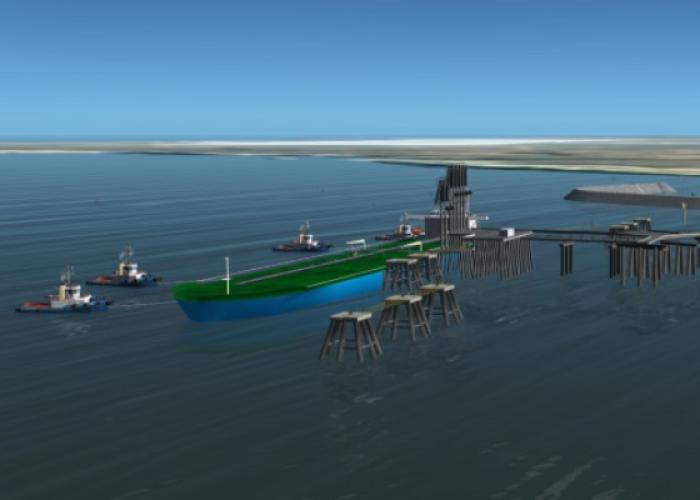