Extensive physical modelling simulations in our labs have contributed to the evaluation and understanding of methods to safely install individual sections of the Scheldt tunnel, a vital part of the new Antwerp ring road in Belgium. Our results give confidence that the unusual and technically difficult construction process will be able to contend with the large tidal currents and passing ships on this important waterway.

The construction of the tunnel is technically difficult as space restrictions in the nearby area mean that its sections will need to be lowered into place. Shipping on the Scheldt will be halted for periods of time whilst each of the eight tunnel elements are Immersed into the pre-dredged trench, but it will recommence, with restrictions, while the foundation bed and backfill are being completed. Once finished, the 1.8km-long tunnel (with three lanes on each side) will form part of the Oosterweel Link, which should help reduce bottlenecks on a key European route.

Our modelling – at a scale of 1:56.5 – examined forces from the tidal currents on the tunnel sections during their lowering into place and on the partially backfilled tunnel elements after installation is complete. To represent the lowering process, we suspended the sections at different depths of Immersion. We also tested the impact of passing seagoing vessels – upstream and downstream at a restricted speed of 6 knots – for the period when the tunnel elements will be temporarily seated on supports before being fully backfilled for completion.

“The physical tests in our facility provide reassurance against analytical and numerical findings modelled by the construction consortium, TM COTU,” said HR Wallingford Project Manager John Alderson. “Detailed testing is important so all the challenges are well understood and a safe and controlled immersion process will be guaranteed.”

The river, its bathymetry, and the trench were modelled in our wave and current basin. We used 4 in-line pumps, each with a 0.3m3/s capacity, to generate the currents. Instruments and dye tracing was used to validate the flows, which are relatively quick at around 1.7m/s to 2.0m/s. Our workshop team constructed tunnel elements from polycarbonate, which was ballast to represent the mass of structure correctly. We also had to model mooring lines and the vessels which were passing by the tunnel installation area. 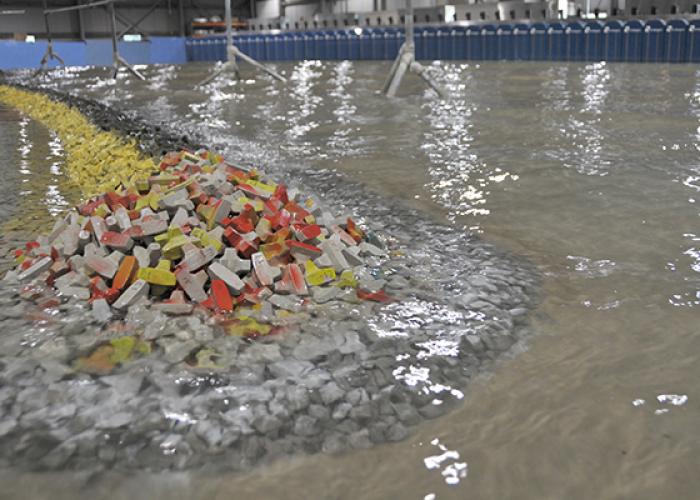